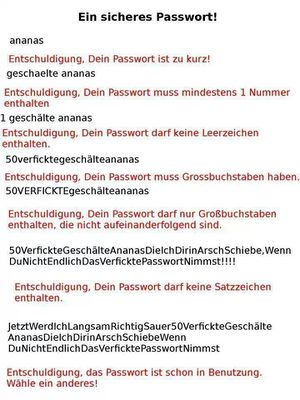 Sometimes we get asked why we do not allow users to chose their initial password by themselves. This is a complex question and we like to explain our current decision:

More about common passwords through the years on Wikipedia

If we would secure the regify messages using this password, the answer would be yes. Like for ZIP archives and any other file encryption. But the regify password is not used for any file encryption. It is used for login at the regify provider system only (online). So brute force attacks are much slower. Also, the regify provider reduces the number of login attempts to a given regify account to one per minute after it failed for more than 10 times (this also applies to a distributed brute force attack).

We also consider our randomly generated 8 character passwords more secure than any 12 digits user generated password. But anyway, every regify provider is able to increase the number of characters for the initial password by himself.

How are the passwords stored in the regify provider appliance database?

Due to technical reasons (like the provider lookup service PLS and cross-provider password reset), we save the SHA1 hashcodes of the passwords. But they are additionally encrypted using AES256 encryption with individual random IV and the SHA256 hashcode of the regify provider clearing password as key. This clearing password is never stored in the database and exists only in a local file outside of the web root. By this, SQL-injection attacks and database leaks are not able to leak passwords directly.

How do I force users to change passwords periodically?

There is no such function in the regify provider. We follow the current guides of NIST (US), CESG (UK) and BSI (DE). Due to research and security experts consent, forcing users to change their password does not increase security. Instead, it very often reduces security because people tend to use more simple passwords and also follow some predictable evolution (like password1, password2, password3 etc.). Password changes are only needed in case the password is compromised in some way.

This paragraph is intended to answer the questions of security experts that like to have a deeper look at the regify-service. If you are an expert having additional questions, please feel free to send us an e-mail at support (at) regify.com (subject "security questions").

What encryption algorithms is regify using?

Client to regify Clearing communication is using ECC encryption with Curve25519 or, in some older applications, RSA with 2048 bits or more.

Client to regify Provider communication is using RSA with 2048 bits or more.

If you are interested in knowing the exact usage of encryption and the communication protocols in detail, please contact us at support (at) regify.com.

You use SHA256 hashcodes to find the message-keys in the clearing database. Isn't there a high risk in collisions that may leak security?

You use 2048 bit RSA keys for identity-file and securing clearing-communication. Isn't that to less?

In general, you need to keep in mind, that the regify system does not encrypt the messages itself using these RSA keys. The messages are getting encrypted using AES256 and the random message-key is stored directly in the clearing-service (new key for every message). Don't compare this to hybrid encryption in other products. The identity-file is not used for hybrid encryption like in PGP and S/MIME. So the assumptions you do may not apply. The integrity and security of the messages is not affected by the identity-file. Instead, the identity-file is used to ensure identity of the sender and recipient against his regify provider during login only (for sending and receiving). It even can get exchanged whenever you want without affecting readability or security of the regify messages itself.

Also, even RSA with 1024 bits is far from getting hacked. Please refer to the RSA Factoring Challenge. In December 2019, RSA with 795 bits was broken. Everything above is still secure today.

The RSA encryption is used by regify for two purposes:

Upon these facts, and contrary to PKI solutions, using 2048 bit RSA encryption as identity file is an ideal compromise between security and speed.

Anyhow, each provider is able to raise the bitlength for identity-files up to 3072 or even 4096 bits for his individual preference.

Why don't you use PKI techniques and standards like S/MIME or PGP?

regify does not work as PGP or other PKI methods. The benefits of the regify-system would not have been possible, if we would use these standards. The benefits, that are resulting directly on the abstinence of standard PKI techniques, are listed on our homepage in the regimail FAQ section.

Update May 2018:
It turns out that PGP and S/MIME emails are insecure by design. It is highly recommended to observe the future development of these standards and carefully make decisions about this.

Short article: Independent UK
Details: Detailed information from the ones who found the issue Bruce Schneier on New PGP Vulnerability

You want to know more details about our regify connection protocol? No problem, just send us an email to support(at)regify.com and tell us why you're interested. We will send you the documents then.