It happens occasionally, that AntiVirus software detects the regify client setup or parts of it as virus. This are false positives.

In order to validate, if you have the correct setup, please ensure that the setup has been downloaded directly from your regify provider.

Do not trust setups that have been downloaded from other pages than your regify provider (at which you signed on) or directly at www.regify.com!

If your regify product is not able to connect to the internet by producing error 59 and you are running a security solution of ESET, you might need to disable the SSL/TLS protocol filtering. With this feature, ESET is trying to intercept every secured communication. This is done in such a bad way, that every software which checks the security of the established connection is detecting this as invalid. regify is creating logfile entries with the remark

Follow this ESET guide to adapt your ESET settings.

We learned, that McAfee VirusScan blocks all port 25 communication by default. It allows only well known software (Outlook) to use this port by default.
Here ist the McAfee Knowledgebase article: KB50707
A quick validation is to temporary disable the virus-scanner for a short time to make your tests.

SEP is using some email proxy functionality that interferres especially with regipay desktop and regibill desktop SMTP sending features. We found several issues like transmission problems, timeouts and occasional RSET commands in data flow. In order to workaround these issues, you need to turn off the Internet Email Auto-Protect feature. 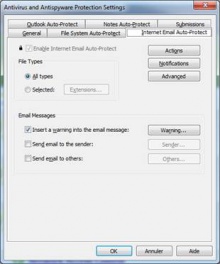 If you are not able to deactivate this, you might go to Control Panel, Programs and Features (was Add/remove Programs), Symantec, Change and remove the POP3/SMTP Scanner feature. 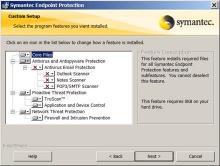